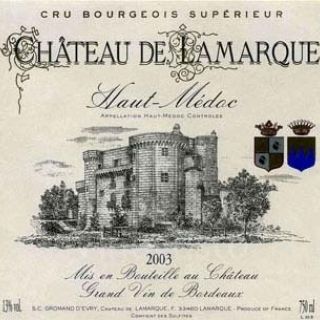 The southern half of the large Médoc appellation, located on the west banks of the Gironde. This is the home of famous Château and even more famous gravel-lined vineyards which produce some of the greatest wines in the world. Stretching from the city of Bordeaux in the south all the way to Saint-Seurin-de-Cadourne in the north, the Haut-Médoc is comprised of 29 different communes and produces in excess of 5 million cases of wine per year. Six of these communes (Margaux, Saint-Julien, Pauillac, Saint-Estèphe, Moulis and Listrac) have their own appellation, and these are some of the most famous and expensive wines in the world. Wines from the other communes are sold simply as Haut-Médoc.

This appellation is used solely for red wines. White wines from the region are sold as either AC Bordeaux or Bordeaux Supérieur. The reds are made primarily from Cabernet Sauvignon, but also with healthy doses of Cabernet Franc and Merlot and smaller quantities of Petite Verdot and Malbec. Up until the late 17th Century most of the area was covered by swamps and marshes, but Dutch engineers drained the waters revealing a rocky gravel soil rich in minerals and perfect for growing grapes. Many say that this soil is the reason for Bordeaux's fame, and certainly any Bordeaux winemaker would tell you that the finesse, power and substance of their wines can be attributed to the ground in which the vines grow.

An often used phrase in Bordeaux is that "The best vines are those that can view the water," of the Gironde, and certainly the best estates are located on the first of many gravel croupes, or mounds that spread out from the river like ripples on a pond. In general, wines made from vineyards close to the Gironde will have the most grace, charm, power and finesse, while those on the plateau to the west will have a sturdier frame and are more forceful, while even further to the west in Margaux the wines are said to be the most perfumed and aromatic.

The Haut-Médoc is dotted with manicured gardens, grand parks and grandiose Châteaus. This is the home of wine aristocracy, though in the last few decades more and more of the ruling families in Bordeaux have been forced to sell to large insurance conglomerates and international companies. The heavy tax on inheritance is taking its toll on a region built by a handful of famous clans. The famous 1855 Classifications of the Château of Bordeaux in which 61 properties were ranked by the wine brokers of the day left a quantifiable mark on many wineries, and to this day remains a guideline for prices and quality of Bordeaux.

Though the more famous communes lie within the boundaries of the Haut-Médoc, there are plenty of delicious wines to be had from the larger appellation. While many do not share the favored sites of the classed growths, the soil types can be very similar, and the prices can be almost reasonable, no small feat in a land known for prices that border on the insane.

Visit Bordeaux for an in depth look at the history of Bordeaux.