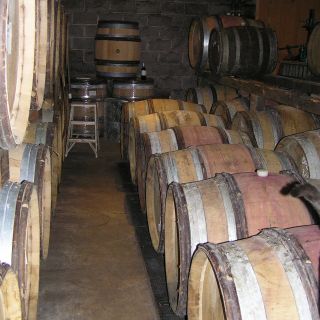 Cameron owner and winemaker John Paul earned a PhD in Marine Biology in the mid-70s, then chucked it all and went to work in a California vineyard for $5 an hour. After a stint as the assistant winemaker at Carneros Creek in Napa Valley, he purchased a vineyard in the Dundee Hills within Oregon's Willamette Valley in 1984.

John Paul is meticulous about maintaining a natural approach to winemaking. When the cellar was constructed he seeded the walls with spores so fungus would flourish and create the appropriate environment for fermentation and aging. Walking down the staircase into the cellar, there's a sense that the cellar is actually alive.

He also relies on spontaneous fermentations as much as possible, attempting to use only the yeasts found on the grapes and within the vineyards. And as a co-founder of the Deep Roots Coalition, he also refuses to irrigate any of his vines, maintaining that it is ecologically irresponsible to do so.

His wines are a serious work of art, and may very well be the closest thing to Burgundy you'll find in North America. His Pinot Noir and Chardonnay are complex and terroir driven. He has recently branched out to experiment with numerous varietals from northern Italy, including Pinot Bianco, Moscato and Nebbiolo.

Cameron was the Winegeeks.com Producer of the Month in June, 2006.