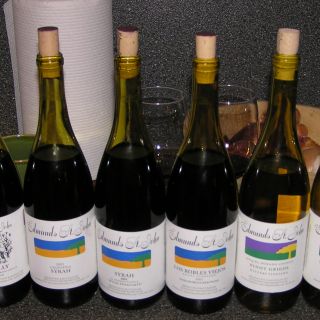 Back in the 1970s and early 1980s, Steve Edmunds worked as a wine buyer for various stores around the San Francisco Bay area. A former home-brewer, he wanted to utilize his artistic side and became determined to make wines that wouldn't get lost in the sea of Cabernet Sauvignon and Chardonnay flooding the market. Instead, he began a ravenous search across the state of California in search of Rhone varietals to produce wines in the style of Southern France. In 1985, Edmunds and his wife Cornelia St. John combined their names and passions by founding Edmunds St. John in a warehouse formerly used by Fretter's Wine Cellars in west Berkeley.

Edmunds hand selects vineyards from around California, including vineyards in Mendocino, Napa, Sonoma, San Luis Obispo and even El Dorado counties, sourcing only from vineyards that are producing grapes appropriate for that location. These grapes are the foundation for his earth-driven wines, of which he produces roughly 4,000 cases per year.

Edmunds uses an open-top fermentation system and racks the wine in used oak barrels to provide a look of the grapes naked, without the influence of oak. He always keeps the wine on the lees to give the wine a mid-palate fullness. Mainly, Edmunds does whatever it takes to maintain his motto, la terre parle, to produce wines that speak of the earth.

Edmunds St. John was the Winegeeks.com Winery of the Month for March 2006.