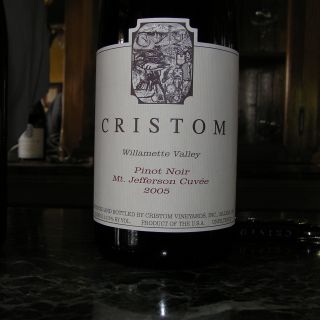 Engineer Paul Gerrie left his career and the East Coast behind to pursue his passion for the vine, and founded Cristom Vineyards in 1991. Situated in the Eola Hills of Oregon's Willamette Valley, the winery has a breathtaking view of the valley and Mount Jefferson in the distance. But perhaps the most intriguing facet of Cristom's winery are the antique mahogany doors imported from France, that integrate a feel of the classic and modern approaches to winemaking that Cristom embraces.

There are 8 vineyards situated to the north and east of the winery, 6 of which are named after family matriarchs of the owners and employees: Eileen, Jessie, Marjorie, Louise, Germaine and Emilia. The first 4 vineyards are planted with Pinot Noir, Germaine contains a plot of Chardonnay, Emilia is filled with Pinot Gris vines and the final 2 unnamed vineyards are home to experimental plots of Syrah and Viognier.

Cristom receives a mild climate, with warm winds slipping in from the Pacific, and ancient volcanic soils that bring the terroir aspect that winemaker Steve Doerner loves in his wines. They practice dry viticulture, although when asked Doerner stated, "But hey, if we're facing a drought and a little water will save our vintage, then I'll irrigate." Cristom's age-worthy wines are great representations on Willamette Valley Pinot Noir.

Cristom Vineyards was the Winegeeks Winery of the Month for June, 2007.